“Phebe Novakovic hardly ever speaks in public. In a rare appearance, the General Dynamics CEO says why. (Video)

General Dynamics Corp. (NYSE: GD), by design, shies away from the public spotlight. Its CEO and chairwoman, Phebe Novakovic, doesn’t speak with the press. And she doesn’t make too many public appearances.

But Novakovic offered us a tiny glimpse of herself and the company beyond its tanks, submarines and ships Wednesday in a conversation with The Carlyle Group CEO David Rubenstein at The Economic Club of Washington, D.C. 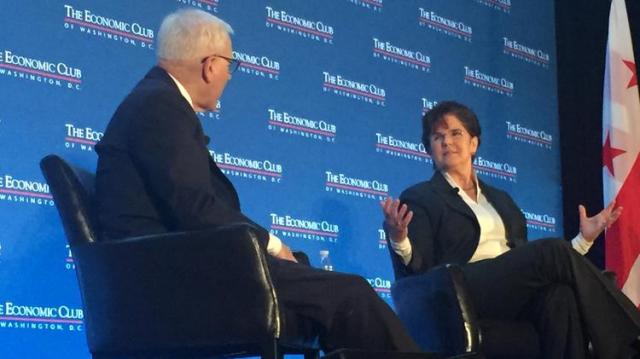 By her own telling, Novakovic certainly didn’t take a conventional path to the C-suite at the Falls Church aerospace and defense giant. Her father was a Serbian immigrant who came to the U.S. at age 17 with only $50 in his pockets. He knew six languages but not English, she noted, and became an intelligence officer in the U.S. Air Force.

Her father was a big factor in her decision to wind up both in government and later at one of the government’s largest defense vendors.

“The opportunities that this country afforded him were really inculcated to me at an early age and so I really believe in serving the nation,” she said.

Novakovic went to Smith College, a liberal arts college in Massachusetts, graduating in 1979. From there, she went to the CIA. When Rubenstein asked her if she could provide details, she swiftly responded, “Not a chance,” pointing out the presence of the Russian ambassador in the audience and drawing laughter from the crowd.

In 1989, Novakovic graduated with an MBA from the Wharton School of the University of Pennsylvania. With two daughters and a third on the way, she began looking for work.

“Can’t imagine that because I was interviewing at eight months pregnant,” she joked.

She ultimately landed a job at the Office of Management and Budget during President George H.W. Bush‘s administration. She later went on to work for the Pentagon under Defense Secretary Bill Cohen and his deputy, John Hamre.

She stayed at the Pentagon under Deputy Defense Secretary Rudy de Leon as Donald Rumsfeld took over the lead role. Rubenstein asked about her experiences with the controversial defense secretary.

“If you intellectually engage with him and he didn’t think you were a pushover, you did OK,” Novakovic answered.

It was in 2001 that Novakovic joined General Dynamics. She didn’t come with the same engineering background as a lot of CEOs in the space, a fact that perhaps drew her to the company in the first place.

“It was different,” she said. “I’m not an engineer. I have not risen through the ranks from 25 years old. I’ve had a … fairly unusual background. And the CEO and chairman at the time was a trial attorney from Chicago, and I thought, ‘Well, there’s a bit of an iconoclastic culture here and maybe there’s a place for me.’”

Still, she never expected to become CEO. She said her parents, both of whom now live in Villanova, Pennsylvania, raised her to be humble.

“They’re proud but they also are mindful that it’s most important to be a good person,” she said. “If my mother, in particular, thinks I’m not being a good person, I still get smacked around.”

Novakovic often mentioned her family during the talk. She told Rubenstein she is a fan of the opera, a love she picked up as a child in Germany from her grandmother, who would often listen to it on a Victrola.

“I honor both her memory and my love of that form of human expression through supporting the opera,” said Novakovic, who does so with her involvement with the John F. Kennedy Center for the Performing Arts.

Novakovic acknowledged that both she and General Dynamics are media-shy.

“Performance speaks for itself and, absent performance, you really don’t have anything to say,” Novakovic said. “Results are, at the end of the day, all that really do matter.”

This for a company that, as Rubenstein noted, has seen its stock grow about 100 percent under Novakovic’s leadership.

She also explained it’s a function of working in close proximity to the government.

“I’ve lived in this town for a long time, and I’ve learned that it’s best to fly underneath the radar screen,” she said. “We’re a quiet company. We pride ourselves on that. We try to be low maintenance. No fuss, no muss.”

She added that she does often speak with investors and is not “cloistered in a nunnery.” She also said she does indeed talk a lot, but her topics are limited: “My three children and General Dynamics.”

Rubenstein asked Novakovic if she would ever consider becoming defense secretary if given the opportunity. She said she best serves national security where she is now — and she’s “got more work to do” at General Dynamics.

“I’m not ready to pack up my dolls and dishes yet,” Novakovic said. “Not for a long time.”